Japan: The Next Big Market for Danish Fintechs? 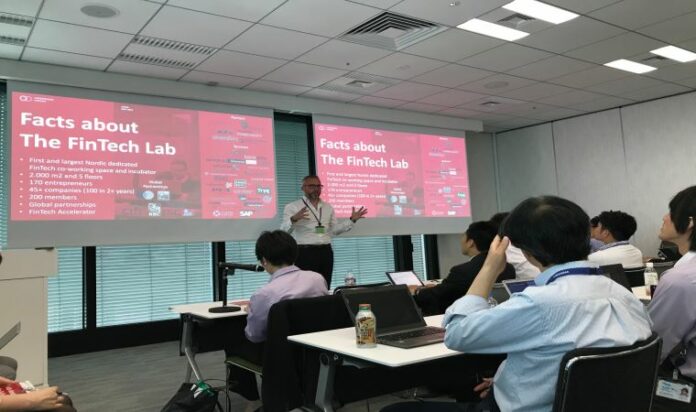 Not limited to Denmark, the technological solutions created by our home-grown fintechs are highly scalable and are increasingly crossing borders. Many companies often become established within the Nordic region or enter a few European markets prior to moving on to the United States. Departing from tradition, Copenhagen Fintech has its sights set on the East.

The fintech organisation has engaged in discussions with tech companies and banks in Japan to bridge the gap between the countries. Among others, it has secured a partnership with the Nomura Research Institute. The next step is to travel to Japan this fall, Covid-19 protocols allowing, to align interests and create business opportunities between the two markets.
According to Simon Schou, the organisation’s chief innovation officer:

It’s not an easy market to enter, given the linguistic and cultural barriers. But the interest is there, the need is there, and the match is there. So we’re focused on how to navigate the challenges.”

Though Copenhagen Fintech has already established cooperation agreements with India and Singapore, Schou suspects that Japan will offer the greatest potential.

Denmark has an advantage beforehand

Despite their differences, Denmark and Japan share similar design philosophies – which may provide Danish fintech companies with a significant head start. To that end, Oliver Hall, head of artificial intelligence and fintech investments at Copenhagen Capacity, has played a critical role in helping Copenhagen Fintech establish contacts in Japan. Although he is based in Copenhagen, Hall considers Japan his second home and is fluent in Japanese. Looking through this dual lens, he describes how Japan is turning to Denmark for inspiration in multiple areas:

“Overall, Danish and Japanese design philosophies are similar. However, the Danish concept of human-centric design is distinctive and highly regarded by the Japanese – as evident from their approaches to app design and city infrastructure to the framework of an egalitarian work-life balance.”

Even though Japan is regarded as a technological front-runner in robotics and production technology, there is a significant gap that they are looking to bridge in software. Last year, the Japanese information technology giant, NEC Corporation acquired Denmark’s KMD for its pioneering work in digital solutions for the public sector. It is also worth pointing out that the Japanese government attempted to replicate Denmark’s digital civil registration system (which was launched in 1968).

The fact that Denmark is a cashless society is also a hot topic in cash-carrying Japan. Nordic countries were not only the first in Europe to set up real-time national payment infrastructures, their fintech founders are among the most successful in Europe – boasting several unicorns, with 16% of all fintech scale-ups located in the Nordic region.
As Hall points out, the money expended in these areas confirms Japan’s interest:

“Over the last three years, the capital that Japan has invested in ‘New Nordic’ startups has exploded. Outside of Silicon Valley, the Nordics have generated the highest number of unicorns per capita in the world. Undoubtedly, this is the new frontier for Japanese investments.”

Danish design is world-renowned, and Mikal Hallstrup has witnessed Japan’s appetite for this first-hand. Currently, he is a founding partner at BWD (a nano-venture company and design studio). However, prior to this, he founded the design company, Designit – which has an office in Tokyo. Over the past years, he has helped small fintech startups and big banks worldwide. In Hallstrup’s words:

“Denmark holds a coveted position in the world of design. Since Japanese and Scandinavians are both fond of simplicity, it is easy to imagine a shared focus on the design and user experience of digital solutions – particularly within fintech.

The idea is for Danish companies to contribute their critical design mind-set, which their Japanese counterparts struggle to execute. This is perhaps not surprising, considering the deep-rooted belief in hierarchy and obedience to authority. When it comes to interpersonal dynamics, many Japanese designers find it unnatural to challenge the status quo and engage in critical analysis.

“The Japanese have a unique expression: The nail that sticks out gets the hammer. If you want to be different and dare to disrupt, you will get knocked back,” Hallstrup explains.

While the Danish retail chain, Tiger and the Mikkeller brewing company took the leap and entered the Japanese market several years ago, only a few fintech companies have explored similar opportunities. Among them, the startup accelerator, Rainmaking has shown that there is a demand for Danish innovation. Since the ‘Rainmaking Startup Bootcamp’ opened its doors in Japan’s second largest city, Osaka last April, it has attracted a line of prominent Japanese partners.

According to Simon Schou, it is only a matter of time before other Danish fintechs successfully enter the Japanese market:

“It only requires a few successful cases to reach a critical tipping point, so we’re currently trying to obtain some successful case stories to showcase the potential. It’s a long process if you want a partnership with Japanese companies. But the dialogue is ongoing and the next step is to get some fintechs to Japan to prove their worth.”

Stian Faber
Stian is founding partner of NFM and acts as Head of Partnerships.
Featured

To give you a great browsing experience and understand what areas of our website are of most interest to you, we'd like to ask for your permission to gather some data about how your use of our site. This allows us to create content that is more relevant to you and to unlock more transformational thought leadership. We appreciate your help and if you want to learn more about how we gather information on the use of our site please visit our