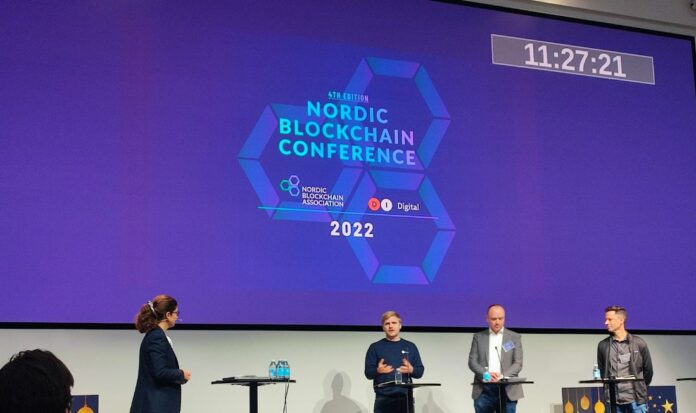 To provide context, the Confederation of Danish Industry (DI) is the largest employers’ and business organisation in Denmark. Its home — the gorgeous glass-fronted Industriens Hus building — is an icon of central Copenhagen architecture, lighting the city up at night with decorative colours to suit the occasion.

And so no event location could be more apt for an association dedicated to a technology that has seen growth at breakneck speed, and which has taken the world by storm — blockchain.

“We are here to solve some of the big issues by dialogue,” Hansen said. “And we’re going to do it by not being afraid of the hard questions.”

The first of the hard questions was how to deal with the fallout of FTX. “I think it’s going to get worse before it gets better,” Lars Seier Christensen, Chairman of the Board of Concordium, said in his opening keynote.

The problem with the FTX fiasco, Christensen explained, was that it exposed the lack of transparency in how everything in blockchain is connected. “That isn’t helpful for mass adoption of blockchain.”

But Christensen also said that this might be “the greatest thing that could happen in the industry.” He cited his experience in the early days of the internet, and how the Dot Com bust paved the way for the real players that came afterwards.

History repeats itself, and the current catastrophe has opened the door to one major certainty: Regulations are coming, and regulations are now welcomed by the major industry players in blockchain.

The other positive outcome of the FTX disaster is that it will force companies to be more mature with their tech.

Speaking of that tech, Christensen said, “Crypto is not the big deal here. Blockchain is the big deal.”

He drew a comparison to Facebook and other internet giants. No one saw those coming in the early days of the internet. “Blockchain is this generation’s internet,” he said, and the equivalents of blockchain’s Facebooks and other giants are still coming.

Talks continued throughout the event on wide and varied topics related to blockchain.

On Stage Two, Jan B. Lillelund, CTO at IBM, told an enlightening story of how quantum computers might be able to crack existing blockchain cryptographic models within a few years. Fortunately, there’s a solution, and blockchain developers should start building blockchains now with this eventuality in mind: The solution is to use “quantum resistant” algorithms to secure blockchain data.

On Stage One, Alexandra Andhov, Associate Professor at the Faculty of Law at the University of Copenhagen, moderated a panel discussing “Digital Money” in all of its various meanings. This includes “e-money”, which has been around roughly since 2000; CBDCs (Central Bank Digital Currencies), which is simply a country’s fiat money issued by its central bank, but that has been issued digitally and is not backed by a physical asset such as silver or gold; and cryptocurrency.

The overall feeling from the MiCA panel was a welcoming one, tying in with Christensen’s opening comments about FTX — that the blockchain industry in general now recognizes that crypto regulation must occur for the industry itself to survive.

When the panel’s moderator asked if MiCA might soon become outdated, panel member Payam Samarghandi, an attorney at Samar Law, answered, “It already is!”

The panel agreed wholeheartedly with him, and the audience chuckled, but Samarghandi explained that this scenario is perfectly normal. Legislation never comes before tech. Technology always paves the way, and then legislation follows. It is to be expected that legislation will lag behind, but MiCA will likely serve as a model that many other regulatory entities in the world will follow.

Marcus Mølleskov, Chief Risk and Compliance Office at Januar, said that MiCA would open the doors wide for institutional players to enter the blockchain scene. Those players have been reluctant to enter the sector without clear regulations in place because it is simply too risky for them, he said.

The “Legal Issues in Blockchain” panel on Stage One discussed the need for lawyers to modernise their processes. Marcus Rebuck, partner at Quastels, pointed out that two corporate entities who want to settle on a contract usually are both quite eager to agree on that contract so they can push forward with mutual trade. He mentioned, however, how sometimes lawyers can slow down that process because they don’t recognise that these entities actually wish to cooperate with each other.

Bringing smart contract programmers into communication with the legal team could help speed up such a negotiation process and thus reduce legal costs immensely for both parties.

Insight from a Stage Two discussion on NFTs in the entertainment industry revealed a recent discovery from a study that the younger generation is entirely ready to adopt NFT technology. Older generations, however, still face friction in adopting this new tech.

Finally, a powerhouse team on Stage One discussed the emergence of DeFi crime and what is being done about it.

NBA spokesperson Peter Geradi Mikkelsen revealed the leadership role that Denmark and the Nordics have taken in the blockchain industry: The first DeFi protocol that actually worked was Danish, followed by the minting in Denmark of the first stablecoin. One of the co-founders of Chanalysis is Danish. Coinify, a Danish company, has had enormous influence in building the crypto infrastructure in the EU.

Mikkelsen asked all the NBA members to come up on stage. Five years ago, he told the audience, people needed to be convinced about blockchain. “Today, it’s clear that this sector is here to stay!” This was followed by an enormous round of applause for the NBA team who made this incredibly successful event happen.

R. Paulo Delgadohttp://www.nordicfintehcmagazine.com
R. Paulo Delgado is a freelance writer and ghostwriter specialising in finance, investment, fintech, crypto, business, entrepreneurship, and technology. He was a computer programmer for 17 years, with particular focus on the finance industry, until he switched roles and followed his passion to become a full-time writer. Since then, his business articles have appeared in Entrepreneur, Moneyweb, Business Insider, and Forbes Councils. His clients have included representatives of CNN, the World Trade Center Gibraltar, and numerous tech startups across the globe.
News