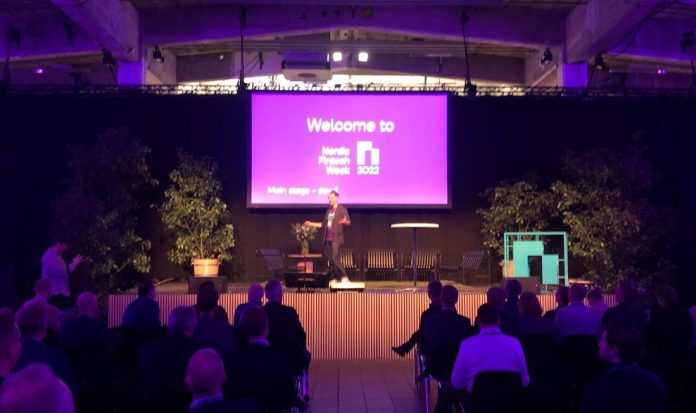 NFWEEK2022 attendees could let their hair down at a Mastercard-hosted barbecue and an Icelandic-themed Networking Drinks event last night. But it was back to business early today on Day #2 of Nordic Fintech Week 2022, with several keynotes being standing-room only.

Day #2 of Nordic Fintech Week 2022 (NFWEEK2022) kicked off with international attendees streaming out of the #37 bus from Copenhagen Central Station, or arriving in bicycles, taxis and personal vehicles.

The event clocked in nearly 1,300 ticket scans in total.

DeFi (decentralised finance) and blockchain commanded immense interest on Day 2. Renowned advisor and investor Mike Sigal set the tone with his keynote titled “Where is smart money going in digital assets?” The numbers he presented were eye-opening: The year 2022 is set to break all records for funding in blockchain.

Whether in crypto, metaverse, NFT, or any other related product or service, blockchain tech is here to stay. And companies that don’t get on that bandwagon will be left out.

In his own keynote, Monerium co-founder and CTO Gísli Kristjánson demonstrated how to send Euros to an IBAN and have them stored immediately on a blockchain, a revolutionary feat that finally closes the largest gap to mass adoption of cryptocurrency — ease of use for the average user.

Industry heavyweights — Hannah Becher of Pleo, Marcus Mølleskov of Januar, Liudas Kanapienis of Ondato, and Julia Ront of Vespia — laid out the real challenges facing companies when tackling financial crime in the metaverse during a panel discussion in Breakout Room 2.

Not only DeFi and blockchain

There was something for everyone at NFWEEK2022.

Estonia, a country where 99% of its government services are digital, and which has the highest per-capita unicorns than any other country, held court on the main stage at 13:00 to explain just what makes this country so attractive for tech startups.

Sophie Bohr Grønbæk, co-founder and CEO of Danish insurtech company Undo, gave a down-to-earth presentation on how to disrupt an ancient industry in five steps.

Leda Glyptis of 10x Banking, and innovation leader Ewan Macleod, held a lively discussion in Breakout Room 1 about fintech opportunities in the Middle East, a strongly relationship-based economy that abounds with untapped opportunities for any Nordic fintech willing to learn how to serve this massive market.

Highly well received were the “Muteboxes” provided by NFM where professionals could cut out the external noise and carry out important meetings in a quiet space.

Due to popular demand, there will be far more Muteboxes at next year’s Nordic Fintech Week!

At the centre of it all, between the main stage and the two breakout rooms, 43 startups displayed their products in the Nordic Startup Zone. The companies hailed from every single Nordic nation, poised for conversations with potential partners and investors.

Just beyond the startup section was the Nordic Pavilion, a booth granted free-of-charge by Nordic Fintech Week to all Nordic fintech and business hubs, including Estonia, so that these hubs could collaborate and be represented at NFWEEK2022.

The result? The first-ever fintech event of this scale that welcomes all Nordic nations.

Siloed in each of its own countries, the Nordic fintech community has never before come together for such a large and well-organised fintech event.

“We are extremely proud that we managed to unite and connect the entire Nordic fintech ecosystem under one roof,” said Stian Faber, Head of Partnerships of Nordic Fintech Magazine. “We have never seen so much networking happen in one live fintech event in the Nordics before.”

“At least 400 or 500 people attended both social events at night,” said Faber.

The quality of the food was no doubt part of it: The barbecue, hosted by Mastercard, served long-roasted beef coulotte, chicken marinated with lemon and Danish flower honey, potato salad with fresh blueberries and grated Parmesan, and other mother-watering dishes.

A live saxophone player teamed up with the DJ to get everyone in the groove for a good night of fun. Iceland hosted the Networking Drinks Event through Lucinity, Business Iceland, and the Icelandic Fintech Cluster, aweing attendees with its ingenious Wheel of Fortune and smoking hot-ice volcano. Come to Iceland! was the message.

Fun, networking, unity, and enough contacts and meetings held to get the fintech wheels turning rapidly in the Nordics for another year until we all meet again for Nordic Fintech Week 2023 which we intend to make even better than this year’s.

Thank you to everyone who attended and who helped make this event such a resounding success!

Ditte Dyhrhttps://nordicfintechmagazine.com/
Ditte is the Co-founder of Nordic Fintech Magazine and head of Product.
News